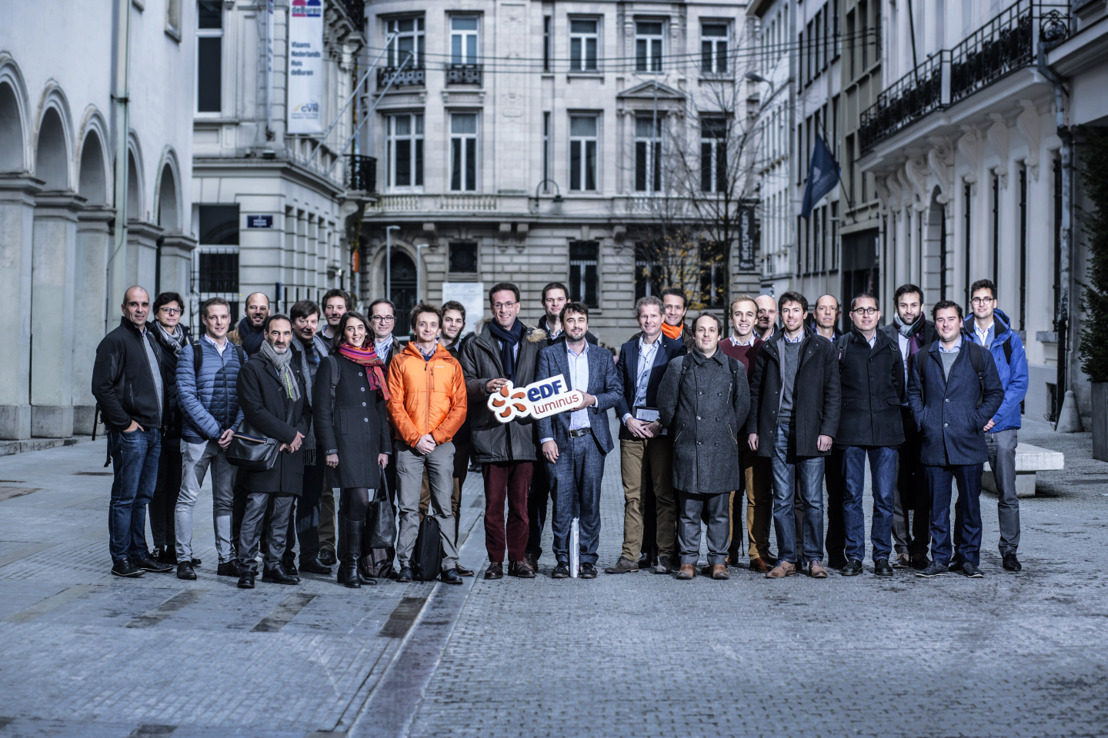 Thursday, December 21, 2017 — Today, a group of employees from the energy producer and service provider, EDF Luminus, will begin developing innovative ideas at Start it @KBC as part of the accelerator’s new “Corporate Incubation Programme”. Start it @KBC is Belgium’s largest start-up network. This new programme, however, is aimed exclusively at supporting “intrapreneurs” within large companies. EDF Luminus is the first company to send multiple teams to Start it @KBC with a view to stimulating internal innovation and further reinforcing the company’s internal start-up culture.

EDF Luminus selected a number of teams who will go to work at Start it @KBC for a period of three months. Participating employees will put their daily tasks aside and apply all their energy and focus into analysing innovative ideas and investigating their potential for development into viable business models. EDF Luminus’ employees will have full access to Start it @KBC’s extensive network of experts while also being assigned an experienced entrepreneur as a personal mentor. In addition, they will also get inspiration from the dozens of start-ups already in the process of developing a minimum viable product (MVP) and scalable business model under Start it @KBC’s wing.

“Our aim in joining Start it @KBC’s Corporate Incubation Programme is to further encourage internal innovation,” explains Grégoire Dallemagne, CEO of EDF Luminus. “We have found that the best and most innovative ideas often come from our own employees. And to stimulate and nurture those ideas, we have developed our own internal innovation programme: #next. Participants in the #next programme are deliberately removed from their daily work environment. So they can fully immerse themselves in the start-up culture at Start it @KBC and, on their return, boost innovation and entrepreneurship within our own corporate culture.”

Platform for intrapreneurs
“Start-ups don’t have a patent on innovation,” states Lode Uytterschaut, founder of Start it @KBC. “The average age of our founders at Start it @KBC is 32, and in many cases, they are people who have come from a large company themselves. Such companies are constantly looking for ways to support their own intrapreneurs. And our Corporate Incubation Programme has been specifically developed to meet that demand and re-export the start-up culture back into large companies.”

The Start it @KBC Corporate Incubation Programme is aimed specifically at major companies such as EDF Luminus. It offers them a platform for challenging employees with entrepreneurial leanings – also known as “intrapreneurs” – while accelerating the process of innovation within their organisation. Participants in the programme are given full access to co-working spaces at Start it @KBC’s six locations around the country, along with the opportunity to exchange expertise with professionals from a wide variety of sectors (legalists, marketers, tech companies, etc.). They can also take part in a multitude of workshops and learn how to pitch their ideas to ensure that, at the end of the ride, their innovative proposals do not end up in the waste paper basket.

About EDF Luminus
Number one challenger in the Belgian energy market, EDF Luminus is a significant renewable electricity producer and energy services supplier. EDF Luminus is one of the main Belgian leaders in green energy development and production, operating onshore wind farms and hydroelectric power plants. The company plays a key role in the country’s security of supply - it operates a wide range of gas power plants which balance variations in renewable energy production. With an installed capacity of 2,018 MW at the end of June 2017, EDF Luminus accounts for about 10% of Belgium’s total installed capacity.

Under its Luminus commercial brand, the company sells electricity, gas and energy services providing high quality service to 1,8 million residential and business customers, representing a commercial market share of about 20%. EDF Luminus invests in the energy challenges of the future, proposing innovative energy efficiency solutions to its customers and pursuing its development in renewables. The future of EDF Luminus is driven by its commitment to high customer satisfaction and the development of its almost 2,000 employees.

For the fifth year running, the company is ranked amongst the Top 59 Employers in Belgium. EDF Luminus benefits from its strong local presence and the expertise of EDF Group, one of the major players in the global energy sector.

Further information is available at www.edfluminus.be